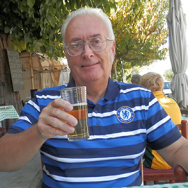 I joined Zingers in February 2013. My wife originally wanted to join after seeing a performance at the Samaritans Fair and an ad for new members in the newspaper, and I agreed to attend with her.

Apart from singing at the Central Hall in Westminster as a 10 year old as part of a primary school carol concert, my singing experience is low unless, of course, you count the occasional drunken Karaoke effort.

I really enjoy the opportunity to engage in making good music. I also enjoy the friendship and camaraderie. I feel a real disappointment when we skip our weekly rehearsal, which isn’t often, thankfully.

My one & only television appearance was in 1984 on a pop music programme called Starburst that ran for only 6 shows.  I was the paralytic drunk on a ferry from Felixstowe to Zeebrugge with live music from The Fortunes, Marmalade and Wayne Fontana and the Mindbenders, none of which I remember.