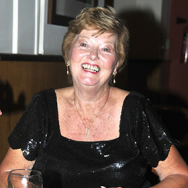 In secondary school, I was in school choir till I left at the age of 15.

I joined the local Elgin Amateur Stage productions when I was 17. I was in chorus for three years, then became principal boy for 6 years and then principal girl for 1 year. I left to have my first child. I was a Sunday school teacher for a few years and also sang in the church choir. I competed in the local music festival, singing mostly Scottish songs, but also some other classes that required a different technique. I won most of the classes with honours or distinction. I then joined the local Amateur Operatic Society in 1966. I was the understudy for Pitti Singh in The Mikado. I stayed with that group for 30 years. I came to Cyprus and joined the Paphos Zingers in February 2012. Zingers changed my life. I just love being a Zinger.